Non-communicable diseases (NCDs) – cancer, heart disease, diabetes, and chronic respiratory disease among others – are leading causes of death worldwide. An estimated 36 million people die from such diseases each year. With 80% of these fatalities occurring in low- and middle-income countries, the
disease burden is particularly heavy and increasing quickly.
Cost-effective interventions are available and, through sustained policy action by the health community, can help prevent millions of deaths among people already afflicted. To prevent or reduce disease burden in others, programs are available to manage risk factors due to lifestyle or genetics.
The IFPMA invites you to the first Geneva Pharma Forum of 2013 for a moderated discussion featuring a distinguished set of experts. On this occasion, the Johns Hopkins Institute for Applied Economics, Global Health and the Study of Business Enterprise will launch a new set of policy briefs collectively titled “Addressing the Gaps in Global Policy and Research for Non-Communicable Diseases.” The authors comprise leading scholars who analyzed gaps in NCD research, policy and practice to make actionable recommendations to close the gaps.

Catherine Fiankan-Bokonga was born in Geneva (Switzerland) to a father from the
DRC and a Belgian Flemish mother. She graduated in Law (France), political science
(USA) and gender studies (Switzerland). She was at first involved in politics and held
positions of responsibility in France, the United States, Canada and Austria.
Passionate about writing and information, she wrote numerous articles at that time
under a pen name. Friends convinced her to dedicate herself entirely to journalism
and she then worked for TF1, FR3, and BRT (Flemish Belgian TV), among others.
A print journalist specializing in African politics, Ms. Fiankan-Bokonga has been a
correspondent in Geneva since 1999. She is also a presenter and producer of
television news reports. She has covered many armed conflicts in Africa (DRC,
Liberia and since 2002 Côte d’Ivoire) and has interviewed numerous African heads
of state.
In collaboration with the Swiss Foundation Media Action International (MAI), she
hosted from 2002 to 2005, numerous seminars with West African journalists to
sensitize them to the duty of non-partisan information in case of conflict. The work
has been praised in a report of the Secretary General of the Organization of the
United Nations.

Mario Ottiglio is Director, Public Affairs & Global Health Policy at the IFPMA where
he has been working since 2007 in positions of increasing responsibility. At IFPMA,
Mr. Ottiglio leads on interactions with key stakeholders such as governments,
international organizations and civil society and coordinates IFPMA Members’
policy positioning on current global health issues. He is also the IFPMA policy lead
on the WHO Global Strategy and Plan of Action for Public Health, Innovation and
IP. Prior to joining the IFPMA, he worked as a consultant, both for governments and
private firms. An Italian national, he holds an MA in Political Science from the
Naples Eastern University.

Sir George Alleyne, a native of Barbados, became Director of the Pan American
Sanitary Bureau (PASB), Regional Office of the World Health Organization (WHO)
on 1 February 1995 and completed a second four-year term on 31 January 2003. In
2003 he was elected Director Emeritus of the PASB. From February 2003 until
December 2010 he was the UN Secretary General’s Special Envoy for HIV/AIDS in
the Caribbean. In October 2003 he was appointed Chancellor of the University of
the West Indies. He currently holds an Adjunct professorship on the Bloomberg
School of Public Health, Johns Hopkins University.
Dr. Alleyne has received numerous awards in recognition of his work, including
prestigious decorations and national honors from many countries of the Americas.
In 1990, he was made Knight Bachelor by Her Majesty Queen Elizabeth II for his
services to Medicine. In 2001, he was awarded the Order of the Caribbean
Community, the highest honor that can be conferred on a Caribbean national.

Jeffrey L. Sturchio is Senior Partner at Rabin Martin. Before joining Rabin Martin,
Dr. Sturchio was President and CEO of the Global Health Council, the world's
largest membership alliance of public health organizations and professionals (in
more than 140 countries on six continents) dedicated to saving lives by improving
health throughout the world.
Dr. Sturchio joined the GHC in August 2009, following nearly twenty years at
Merck & Co., Inc., where he was Vice President, Corporate Responsibility, and
managed a portfolio of activities including Merck's corporate philanthropy, the
Merck Institute for Science Education, the Merck Childhood Asthma Network,
global health partnerships (including the Merck MECTIZAN Donation Program),
global HIV/AIDS access programs, corporate responsibility reporting and the
Merck Archives. He also served as President of The Merck Company Foundation, a
US-based, private charitable foundation established in 1957 by Merck & Co., Inc.,
which is Merck's chief source of funding support to qualified non-profit, charitable
organizations. (In 2007, Merck made cash contributions of $62 million, donations
of medicines and vaccines -- including the Merck Medical Outreach Program and
the MECTIZAN Donation Program -- of $605 million, and donations of medicines
through the Merck Patient Assistance Program of $161 million.) Since 2000, Dr.
Sturchio was centrally involved in Merck's participation in the UN/Industry
Accelerating Access Initiative to help improve HIV/AIDS care and treatment in the
developing world. He was a member of the board of the African Comprehensive
HIV/AIDS Partnerships in Botswana (2005-2009) and a member of the private
sector delegation to the Board of the Global Fund to Fight AIDS, TB and Malaria
(2002-2008). He joined Merck in June 1989 as the Company's first Corporate
Archivist.
In 2008-2009, he was also Chairman of the Corporate Council on Africa, whose
150 member companies represent some 85 per cent of total U.S. private sector
investment in Africa and work closely with governments, multilateral
organizations, NGOs and business to improve the trade and investment climate
on the African continent and to raise the profile of Africa in the US business
community. Dr. Sturchio is also a Visiting Scholar at the Institute for Applied
Economics, Global Health and the Study of Business Enterprise at The Johns
Speaker Biographies
Hopkins University and a member of the Global Agenda Council on Health of the
World Economic Forum.
Dr. Sturchio received an A.B. in history (1973) from Princeton University and a
Ph.D. in the history & sociology of science from the University of Pennsylvania
(1981). His previous positions include the AT&T Archives, the Beckman Center for
the History of Chemistry at the University of Pennsylvania, Rutgers University,
and the New Jersey Institute of Technology. He has also been a Postdoctoral
Fellow and Senior Fellow at the Smithsonian Institution's National Museum of
American History (NMAH) and a Visiting Fellow of LSE Health and Social Care at
the London School of Economics. In 2004 he was elected a Fellow of the American
Association for the Advancement of Science. In 2010 he was elected a Member of
the Council on Foreign Relations.

Dr. Margaret E. Kruk is Assistant Professor of Health Policy and Health. Dr. Kruk’s
Management at Columbia University’s Mailman School of Public research focuses
on health system effectiveness and population preferences for healthcare in subSaharan
Africa, including in Tanzania, Ethiopia, Liberia and Ghana. She has
published on women’s preferences for maternal healthcare, health systems
effectiveness, healthcare financing, and evaluation of large-scale health programs
in low-income countries. Previously, Dr. Kruk was Assistant Professor in Health
Management and Policy at the University of Michigan School of Public Health and
policy advisor for Health at the Millennium Project, and advisory body to the UN
Secretary-General on the Millennium Development Goals.

CEO of the Union for International Cancer Control (UICC)

Born in London, Cary Adams has a BSc Honors degree in Economics, Computing
and Statistics from the University of Bath, United Kingdom and a Masters degree
(with Distinction) in Business Administration. He is a Harvard Business School
Alumni having attended the School’s Executive General Management program in
2003.
In 2009, Mr. Adams made a career change, moving from the management of
international businesses in the banking sector to become CEO of the Union for
International Cancer Control (UICC), based in Geneva.
UICC exists to help the global health community accelerate the fight against
cancer and its growing membership of over 760 organisations in 155 countries
features the world’s major cancer societies, ministries of health and patient
groups and includes influential policy makers, researchers and experts in cancer
prevention and control.
Mr. Adams and his team focus on global advocacy to deliver the World Cancer
Declaration targets by 2020, running significant global programs that address key
cancer issues and use their membership reach to bring about the exchange of best
practice globally.

Michel Manon is Vice –President Non-Communicable Policy and Strategies,
Bristol-Myers Squibb. During his career in the Pharmaceutical Industry and in
many countries and regions (Russia, Israel, South-East Asia and Africa ) he
became acquainted with diverse environments and issues in relation with
Healthcare. He has been involved the Access Program Bristol-Myers Squibb
initiated in Africa as well as “ Secure the future “ , a $120 MM Program the same
Company deployed in South Africa and in some others West Africa countries.
In 2011 he contributed in a Research study in Russia “ Population Attitude to
Personal Health: Perception of Health, Understanding of risk-factors, Morbidity
and Mortality, which has been presented at the occasion of the WHO Global
Forum
Michel Manon is Anesthesiologist by education, graduated from Montpellier
University France 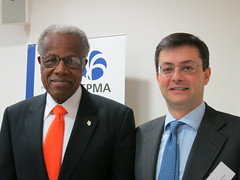 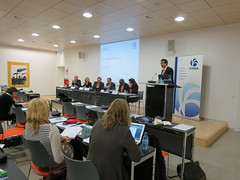 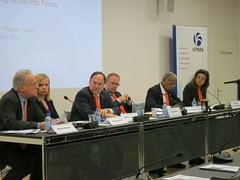 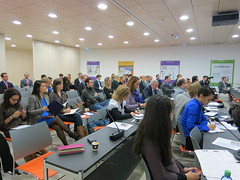